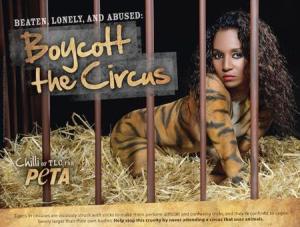 “There’s so much cruelty behind the scenes, which is a something that a lot of people don’t get to see,” Chilli explained in an exclusive PETA interview. “They’re being mean to them to make them do this trick .… And I think that everybody needs to be aware of what’s really going on….If you can raise awareness to something that’s important, such as this, then you should,” she says. “Because I know for a fact that I would never want to be in a cage.”