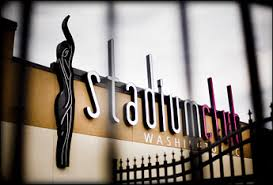 Stadium Nightclub is being sued by one of their former exotic dancers. She alleges that she was coerced into having sex with one of the venue’s managers in order to keep her job. Talayna Clements filed a lawsuit against the popular Northeast DC strip club in a U.S. District Court alleging sexual discrimination and creating a hostile work environment.

In July, after a party with unnamed NFL players, the general manager asked Clements to have a drink with him and to perform a dance, the attorneys state. While she was dancing for the general manager, he pulled down his pants and had sex with her, the lawsuit alleges.

“The Plaintiff was scared and intimidated. She did not know what to do. So she unwillingly had sex with him for fear of losing her job and her livelihood,” the lawyers claims. “Plaintiff felt humiliated. Plaintiff felt ashamed. She also felt dirty, so she left the Stadium.”

See the full report below: