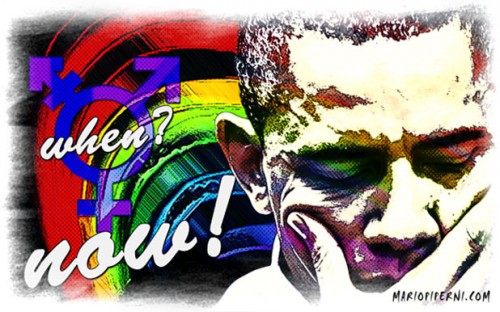 There will be those who say that President Obama has sealed his own fate by standing up for this highly controversial issue. However, the fact remains that whatever ones belief the bottom line is about human rights. An ability to be free to love and be loved by whomever brings that state of being to ones life.

However,does this decision begin to excuse sexual deviance as well?

Perhaps giving license for some to reach beyond same sex issues and encroach into other more inappropriate types of love? For instance: man & animal, child & adult predator and/or man & inanimate objects. We have reported that the ‘hoe bots’ are coming, is this the political door that will make it possible to LOVE WITHOUT LIMIT?

BABY DADDY NEWS: TERRELL OWENS IS CALLED OUT ON DR. PHIL [VIDEO] SUSPENDED METTA WORLD PEACE IS LAUGHING IT UP AROUND TOWN &... GETTING PAID