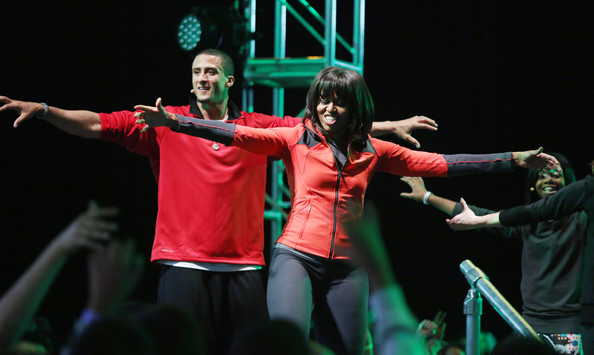 First Lady First Lady Michelle Obama has to be the coolest first lady EVER!!! Our super fly and fabulous first lady recently had a photo-op with San Francsico 49ers superstar and 2013 Super Bowl contender Colin Kaepernick. Colin, who has become a sports phenomenon with “Kaepernicking” where he kisses his own “guns” (also known as biceps). He posed with the First Lady as she joined in and “Kaepernicked” her own famous guns.  He tweeted, “I got the opportunity to meet one of the greatest women in the world, the first lady @first_Obama and even got her #Kaepernicking”.

FYI, Colin plays a big role with the First Lady’s “Let’s Move” campaign where he travels around the country promoting physical fitness.

She Did That! Kelly Rowland Releases Spicy Cover For "Talk A Good Game" NEW VIDEO: “WHO DO WE THINK WE ARE”-JOHN LEGEND FT. RICK ROSS